People with passion to wine 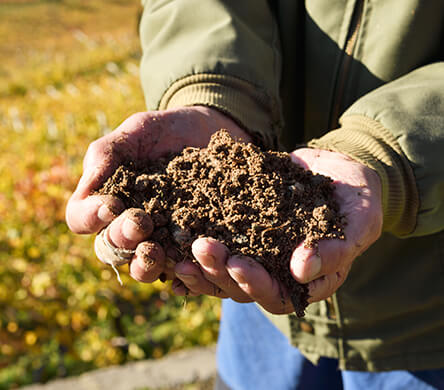 In harmony with nature

Nature’s gifts must be employed with respect and understanding.
The Cantina Bolzano winegrowers have a strong focus on near-natural methods and sustainably managed vineyards. They are committed to treating the soils and vines with the greatest care.

In a slow process of maturation the best results are achieved with expert helping hands: daily inspection of the vines, thoughtful pruning, careful thinning – all the little jobs that lay the foundation for a top-quality harvest. 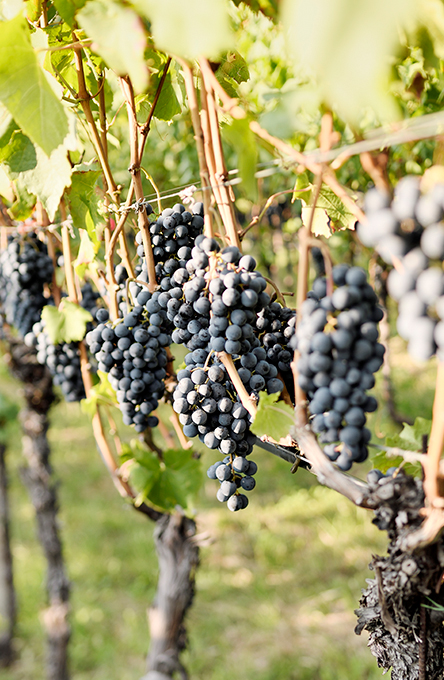 For a unique quality wine, time is all important. During months of passionate dedication on the part of our winegrowers, top quality grapes ripen in the generous sun of Alto Adige. After the harvest in autumn, the grapes are brought in and sensitive vinification begins under the watchful eye of our winemaker Stephan Filippi and his team.

The production process serves only one goal: first-class quality. And in the new winery, which has been built to the low-energy standard, the direction is clear: top-down. The grapes enter the building at the highest point and pass with the help of gravity alone through a vertical system until they finally arrive at the lowest point and are further processed site by site. This process is kind to the grapes and also saves resources and energy during vinification of the various wines.

“Making good wines is a craft: making great wines is an art.” The fact that winemaker Stephan Filippi has mastered it is evident not only from the Lagrein Riserva Taber. With long years of experience in winemaking and a passion for the product, he creates unique and distinctive quality wines. Subtle wines that are full of character and very much in keeping with the spirit of the times.
The many accolades and awards won by the wines of Cantina Bolzano are due in no small part to Stephan Filippi’s intuitive relationship with wine and his commitment to excellence.

Our premium wines are allowed to rest for up to 12 months in barriques and then aged in the bottle. The results in the glass: brilliant fruit, the characteristic aroma of the grape variety, and ample substance and a multi-faceted personality. 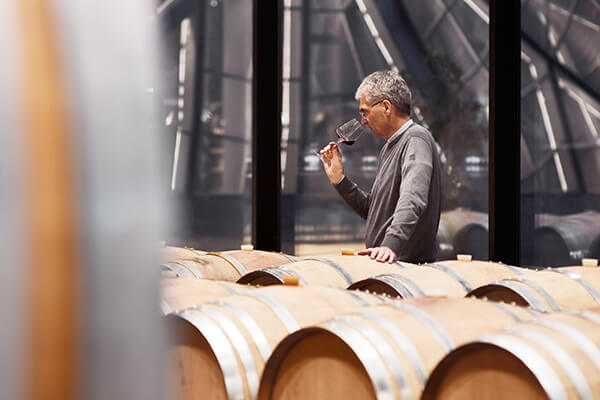 In 1908, thirty wine growers in Gries decided to form a cooperative in the climatic spa of Gries. Another winemaking cooperative was founded in 1930 by 18 wine growers located around the hill of S. Maddalena. The objective in both cases was to promote local and autochthonous wines. Today the winegrowers’ cooperative has a membership of 224 families with a shared goal: diversity, passion, enjoyment.

In 1908 the ambitious goal was to produce and market the autochthonous Alto Adige varietals Lagrein and Schiava.

After the Second World War, the Gries Winery was able to establish itself on the German market with its Lagrein Kretzer rosé.
Despite the turbulence caused by the difficult years of the 1970s and 1980s, the winery managed to increase sales of its Lagrein flagship wine and to consolidate its market share through a change of focus in production from quantity to quality.

In response to the wine-growing crisis, the Santa Maddalena Winery also repositioned itself. With its leading varietal – Santa Maddalena, a relatively strong wine made with Schiava grapes – and a quality-first approach, the winery enjoyed considerable success at home and abroad. A key factor was the decision taken in 1971 to define and upgrade the Santa Maddalena territory in the context of the Italian DOC system.

In 2001 the Gries and Santa Maddalena wineries agreed on a merger with the aim of bundling their resources, becoming one of the leading players in Alto Adige and consolidating their range of wines in line with market demand.

In 2018 the cooperative moved to Via S. Maurizio 36: a gleaming cube that rises majestically from the hillside. It houses the offices, the Vinarius Wineshop and the production area, which is located mainly underground and is designed throughout to serve the quality of the wines. The new winery has been built to the low-energy standard in the interest of energy efficiency and sustainability – and the production of ClimateHouse wines. 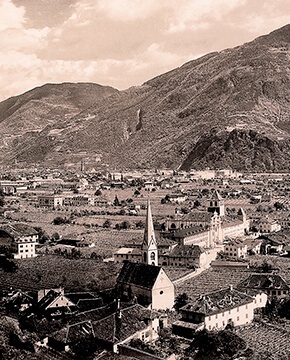 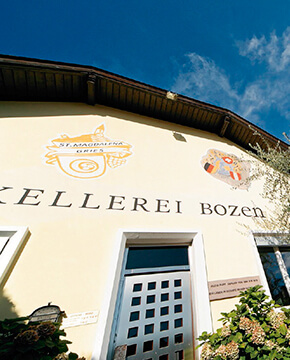 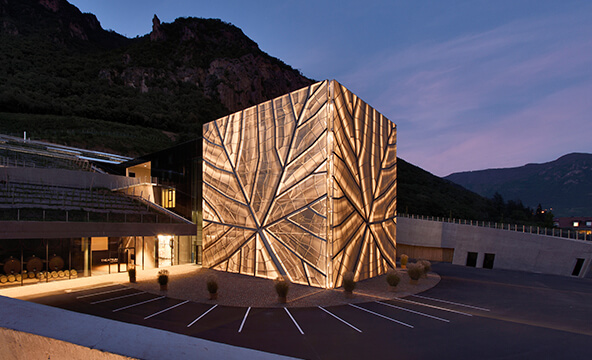 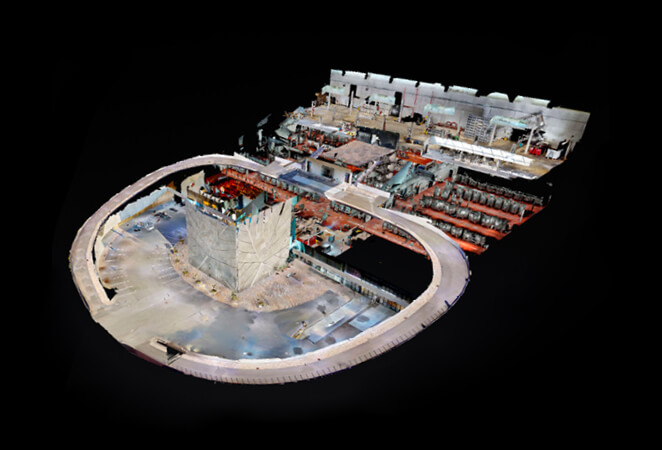 The people behind it

224 members of the cooperative who are dedicated and passionate about wine-growing. A large family of people who are committed to the cultural landscape that has evolved organically around Bolzano and who attach more importance to quality than quantity. That is who we are. That is Cantina Bolzano.

A few of our members … 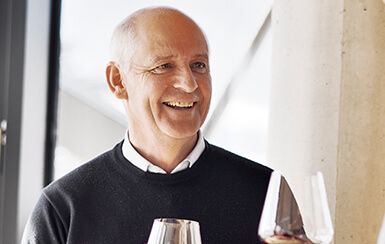 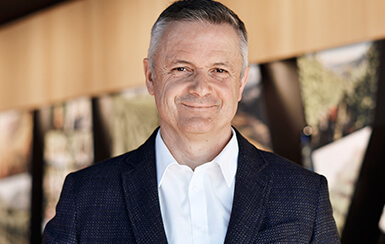 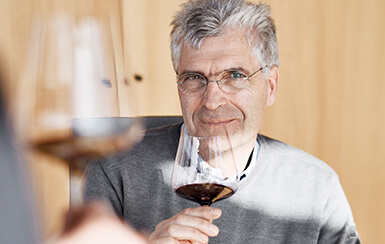 The chairman of a cooperative made up of 224 wine growers must be able to exert a harmonizing influence. Michl Bradlwarter clearly has that ability or he would not have been repeatedly elected to this office for so many years. Every member has his own character and opinions – “and yet we are one family”, says Michl Bradlwarter. At all events, Bradlwarter spends a lot of time visiting the wine growers and talking to them. “We’re not letting up; from year to year, we continue to enhance the quality of the wines. Ultimately it’s

what’s in the bottle that counts.” That is his firm belief and it is why he loves his job. And today Cantina Bolzano is one of the leading producers in Alto Adige. In addition to its well known red wines, the winery has built up an outstanding reputation for white wines, too. That is doubtless a result of the ongoing dialogue between the winery’s chairman and wine maker and the wine growers. “We’ve certainly benefited in this regard from the fact that Alto Adige and Bolzano are familiar names throughout Europe, and that’s something we can build on”. Since the age of 18, Michl Bradlwarter has worked in various functions in the wine-growing and cooperative sector in Alto Adige, first in various agricultural organizations and later as Chairman of the winery. “I’m constantly out and about promoting the interests of the wine growers,” he says, making it sound a bit like the motto of the Three Musketeers: “All for one and one for all”. Over the years, a strong team spirit has developed among the members of Cantina Bolzano, because each in his own way is responsible for the success of the winery.

With pride and humility.

Is pride allowed at what you see? The answer is yes, if your name is Klaus Sparer and you are Managing Director of Cantina Bolzano. The new winery building is also a new landmark for Bolzano, one that underlines the importance of wine growing in Alto Adige. “But success has not gone to our heads,” says Klaus Sparer, “We have retained our humility” – humility in the light of the achievements of earlier generations, “because it was our fathers and grandfathers who laid the foundations for our success”. Klaus Sparer has now been managing the cooperative for three decades together with the chief winemaker Stephan Filippi. Together with Chairman Michl Bradlwarter they form the winning trio that so brilliantly combines tradition and innovation. He does not like to be called “boss”. “We are the servants of our 224 members, who work out in the vineyards day in day out,” he says. This understatement goes well with Cantina Bolzano’s wines: top-quality products that require no blah-blah to be convincing. At all events Klaus Sparer doesn’t waste words when it comes to questions of strategic orientation and achieving targets; he prefers to take the decisions needed to ensure the smooth running of all the processes in a winery of this size. “Something like that can only be achieved as a team,” he says. Who would disagree?

Winemaking as a passion.

There cannot be many winemakers with as much knowledge and experience as Stephan Filippi. The Chief Winemaker at Cantina Bolzano took charge of the Maddalena Winery more than three decades ago, when the cooperatives of Santa Maddalena and Gries were still producing their wines separately. Diversity was not the name of the game in the 1980s. The offering comprised just three varieties: Santa Maddalena, Schiava Grigia and Lagrein. Today the new Cantina Bolzano has a diverse range comprising 37 different

wines made with 15 grape varieties on its shelves, differentiated by site and quality level. And Stephan Filippi has not only found the right touch in the cellars: Together with the cooperative’s wine-growing consultants, he has been able to convince the members to improve the quality of their grapes year after year. The fact that wines from Cantina Bolzano today achieve outstanding scores in many rankings and that the formerly mass-produced Santa Maddalena and Lagrein wines are now internationally acknowledged, award-winning varieties – all that is also his personal achievement. He cannot do otherwise: Wine is Filippi’s passion. And no wonder – his father was the winemaker in Santa Maddalena before him. And guess what his daughter does: She is studying oenology, too – because a passion for wine is infectious, and the Filippis obviously have it in their blood. And Filippi would not be Filippi if he were satisfied with what has been achieved. With selected wine growers, he is working on further quality enhancements in terms of location, soil, and vine density and age in order to consolidate the future and continue the success story of Cantina Bolzano.